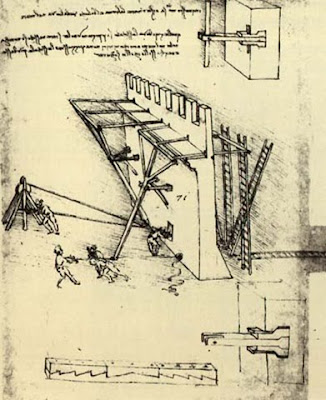 Wall Defense
Leonardo designed complex and ingenious methods of defence. Here, when the walls are under attack, the soldiers hidden behind the battlements could quickly and easily ward-off enemies and their single movement by using a system of levers. As the enemy used ladders in an attempt to breach the walls, the levers were engaged to move the rails built into the walls that the ladders were leaning on, causing them to become unstable and eventually fall. 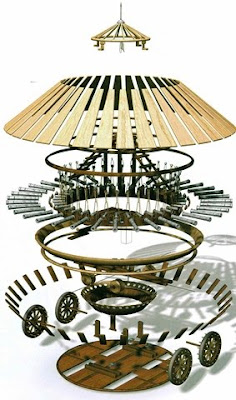 This is perhaps one of the most famous of Da Vinci’s projects. His idea of reaping panic and destruction among enemy troops was envisioned in this tortoise-shaped vehicle, reinforced with metal plates, and ringed with cannons. In a job application to the Duke of Milan, Da Vinci boasted "I can make armoured cars, safe and unassailable, which will enter the close ranks of the enemy with their artillery, and no company of soldiers is so great that they will not break through them. And behind these the infantry will be able to follow quite unharmed and without any opposition." Da Vinci’s precursor to the modern tank surely could have created "shock and awe" on the 15th-century battlefield, the design contained some serious flaws. Even with several modifications to the original plans he continued to be faced with a number of unresolved problems and eventually abandoned the project. 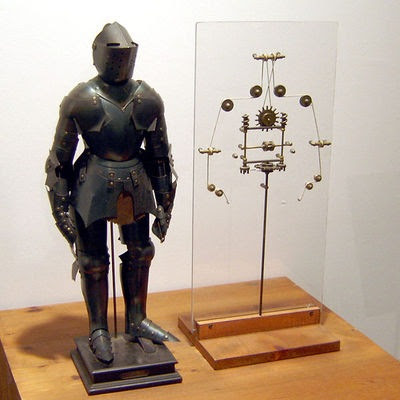 Leonardo Da Vinci’s mechanical knight was not discovered until 1957, when Carlo Pedretti discovered it, hidden amongst Da Vinci’s countless designs. The mechanical knight, first sketched by DaVinci in 1495, was mentioned in 1974, in the Codex Madrid edited by Ladislao Reti, but there was no attempt to reconstruct it until 1996 when Mark Rosheim published an independent study of the robot, followed by a joint enterprise with the Florence Institute and Museum of the History of Science.
However, it was not until 2002 that Rosheim built a complete physical model of the robot for a BBC documentary. Since then, a soldier on wheels labelled, “Leonardo’s robot” has been included in countless exhibitions and museums.
In the 2007 Mario Taddei made a new research on Da Vinci’s original documents finding enough data to build a version of the soldier robot, more closely related to the original drawings. This robot was designed just for defensive purposes, not for war or theatre. Its movements are somewhat restricted since the arms only move right and left when pulled with a rope. This particular model is shown in various exhibitions around the world and the Tadei’s research results are published in the book, Leonardo Da Vinci’s Robots. 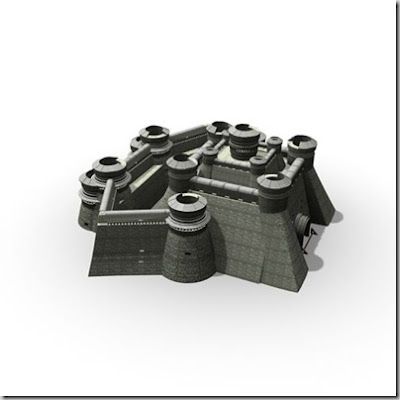 Leonardo designed this fortress with the idea of rendering it safe from the attack. The elaborate shape is innovative and presumably could have been an effective defence against the impact of deadly artillery projectiles.
The Da Vinci fortress could be considered by many as very modern in its design with its circular towers and the slightly inclined exterior walls designed to absorb attacks from firearms. The lord of the castle lived in the centre of the complex, which, according to original drawings also features a secret underground passage. In addition, the fortress features two levels of concentric walls, the tops of which are rounded, in order to help deflect the impact of cannon fire. Small openings make it possible for those fighting from within to return fire with minimum risk of injury from the outside. 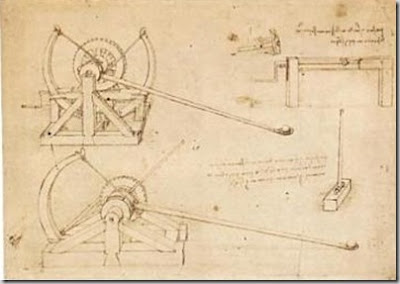 
The basic design of the catapult had been in use for hundreds of years before Da Vinci embarked upon improving it. He actually came up with several different models. This particular design uses a double leaf spring to produce an enormous amount of energy in order to propel stone projectiles or incendiary materials over great distances. Loading of the two large leaf springs was accomplished using a hand crank on the side of the catapult.

Posted by mpejal2 at 2:01 PM No comments: Links to this post 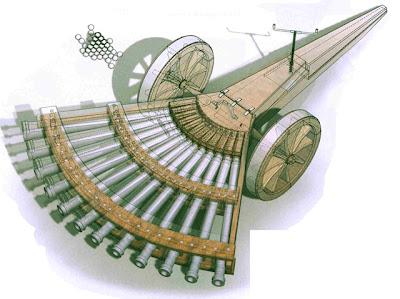 The multi-barrelled machine gun was a weapon with remarkable firepower. Da Vinci sketched this rolling artillery battery around 1480 while in Florence, perhaps as a calling card to a warrior prince in need of a military architect. A hand crank adjusts elevation, and reloading is a major challenge – especially when under fire .
Though capable of rapid-fire which later model machine guns became noted for, this his housed an ingenious aiming and loading mechanism. By widening the field of fire, the fan-like shape of Da Vinci’s prototype made it a potentially effective weapon against a line of advancing troops. In addition Da Vinci’s design was easy to move around on the battlefield because it was lightweight and mounted on wheels 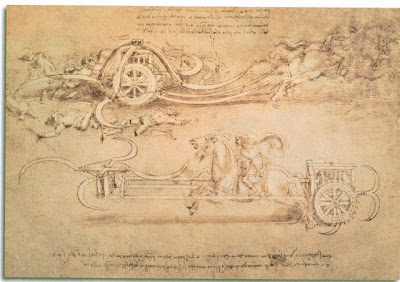 This is one of Leonardo’s most beautiful manuscripts. His sketches horse drawn reveal carriages covered with sharp, swirling blades that moved in the thick of battle slashing through everything in their wake. The rotating blades were specifically designed to sever the limbs from its victims. In one of his drawings, Da Vinci illustrated the carnage in such gruesome detail that his notation indicated that his contraption probably would wreak as much havoc on friends as on foes. 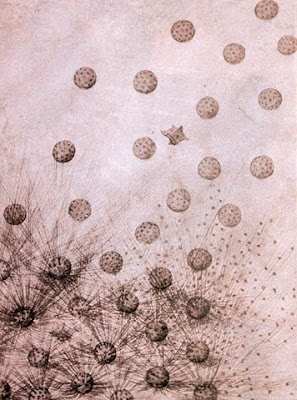 To make the bombard, or cannon, a weapon already known at the time, even more deadly, Da Vinci also designed large projectiles, comprised of round shells fitted around iron spacers and stitched inside a pliable casing. Once fired, this invention exploded into many fragments with that had greater range and impact than a single cannon-ball. 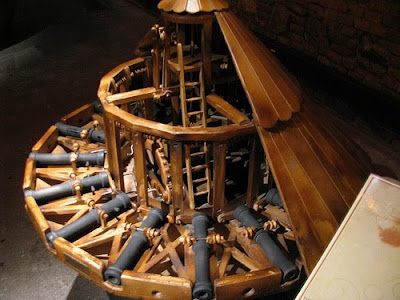 This drawing is on of the first page of the Codex Atlanticus. The drawing itself is very complete and quite fascinating, illustrating the plan of a bombard with sixteen radial cannons. The most interesting aspect of the project is the centre of the bombard itself, housing a pair of mechanical paddles and gear wheels, providing only a partial glimpse of the possibilities of massive weapon.

Posted by mpejal2 at 1:21 AM No comments: Links to this post 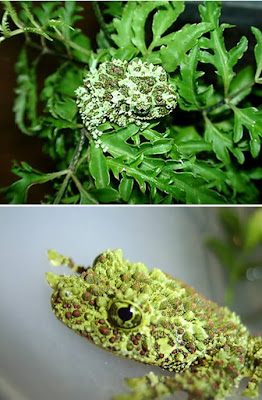 Theloderma corticale, or the Vietnamese mossy frog, is a species of frog in the Rhacophoridae family. It is found in Vietnam and possibly China. Its natural habitats are subtropical or tropical moist lowland forests, intermittent freshwater marches, and rocky areas. The common name of the mossy frog arises from the fact that its skin is a mottled green and black that resembles moss growing on rock, and forms an effective form of camouflage.

Some people have this frog as a pet. The price of this beautiful animal is about $45-$75 (each). 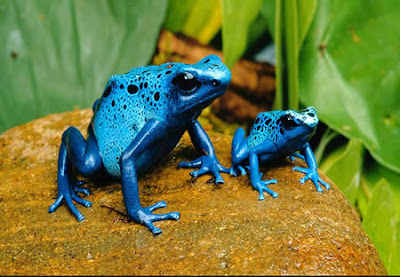 Poison dart frog, like this sapphire-blue species, is the common name of a group of frogs in the family Dendrobatidae which are native to Central and South America. Unlike most frogs, species are active during the day, and often exhibit brightly-colored bodies. Although all dendrobatids are at least somewhat toxic in the wild, levels of toxicity vary considerably from one species to the next, and from one population to another. Many species are critically endangered. These amphibians are often called "dart frogs" due to indigenous Amerindians' use of their toxic secretions to poison the tips of blowdarts. 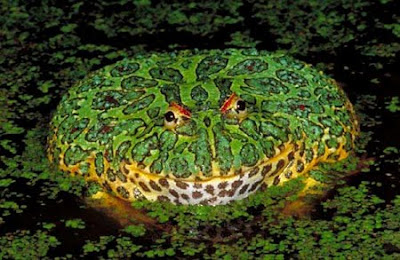 The ornate horned frog can grow up to six inches long and inhabits Uruguay, Brazil, and northern Argentina. While it may look like a lifeless pincushion, it's quick to lunge when lizards, small rodents, birds, or other frogs blunder by. 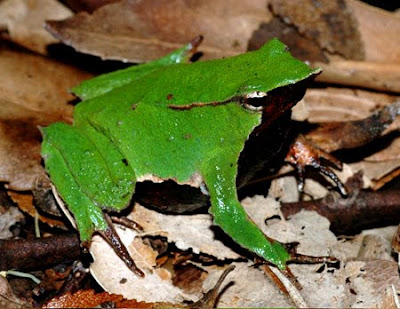 The Chile Darwin's frog was fairly regularly seen until around 1978, since when it seems to have disappeared, and the species may now be extinct. This species, which lives in the leaf litter on the forest floor, has an unusual method of parental care; the male takes the fertilised eggs from the nest into his vocal sac where they hatch into tadpoles after approximately eight days. When he starts to feel the newly hatched tadpoles wriggling, the male carries them to a stream where he expels the young. Here they complete metamorphosis.