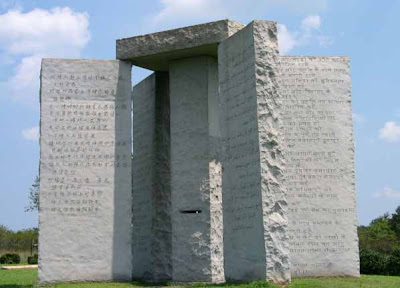 While most of the mysterious monuments on this list only became that way as centuries passed, the Georgia Guidestones, also known as American Stonehenge, are one landmark that was always intended to be an enigma. The monument, which consists of four monolithic slabs of granite that support a single capstone, was commissioned in 1979 by a man who went by the pseudonym of R.C. Christian. A local mason carefully crafted it so that one slot in the stones is aligned with the sun on the solstices and equinoxes, and one small hole is always pointed in the direction of the North Star. Most interesting, though, are the inscriptions on the slabs, which an accompanying plaque describes as “the guidestones to an Age of Reason.” In eight different languages, the slabs offer a strange ten-point plan to ensure peace on Earth that includes vague proclamations like “prize truth–beauty–love–seeking harmony with the infinite,” to very specific commands like “maintain humanity under 500,000,000 in perpetual balance with nature.” Comments like this one have made the Guidestones one of the most controversial landmarks in the United States, and they have long been protested and even vandalized by groups that would like to see them demolished.


The Mystery
For all their controversy, very little is known about who built the Guidestones or what their true purpose is. R.C. Christian claimed he represented an independent organization when he commissioned the landmark, but neither he nor his group has spoken up since its construction. Since the monument was built during the height of the Cold War, one popular theory about the group’s intentions is that the Guidestones were to serve as a primer for how to rebuild society in the aftermath of a nuclear holocaust.
Posted by mpejal2 at 7:44 AM No comments: Links to this post