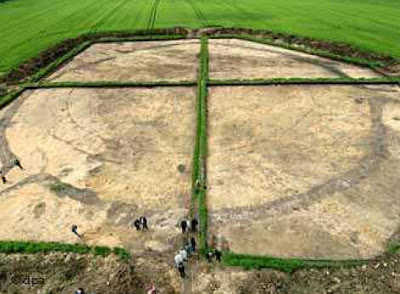 One of the most mysterious landmarks in Germany is the Goseck Circle, a monument made out of earth, gravel, and wooden palisades that is regarded as the earliest example of a primitive “solar observatory.”


The circle consists of a series of circular ditches surrounded by palisade walls (which have since been reconstructed) that house a raised mound of dirt in the center.

The palisades have three openings, or gates, that point southeast, southwest, and north. It is believed that the monument was built around 4900 BC by Neolithic peoples, and that the three openings correspond to the direction from which the sun rises on the winter solstice.

The Mystery
The monument’s careful construction has led many scientists to believe that the Goseck Circle was built to serve as some kind of primitive solar or lunar calendar, but its exact use is still a source of debate. Evidence has shown that a so-called “solar cult” was widespread in ancient Europe.

This has led to speculation that the Circle was used in some kind of ritual, perhaps even in conjunction with human sacrifice. This hypothesis has yet to be proven, but archeologists have uncovered several human bones, including a headless skeleton, just outside the palisade walls.

Email ThisBlogThis!Share to TwitterShare to FacebookShare to Pinterest
Labels: Mysterious