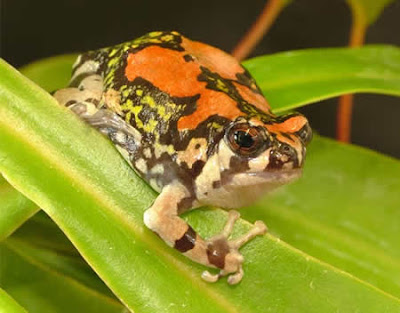 The Malagasy rainbow frog lives in the rocky dry forests of Madagascar's Isalo Massif, where it breeds in shallow temporary pools found in canyons. This species is well adapted to climbing in its rocky surroundings, and can even scale vertical surfaces! When threatened, this frog will inflate itself as a defence mechanism against predators. 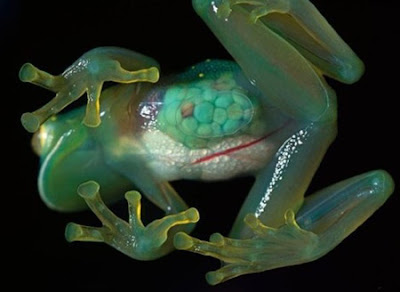 Hyalinobatrachium pellucidum, also called as glass or crystal frog because you can see through its transparent flesh (right down to its guts). This guy's not new, but he's definitely endangered, so the find is heartening for environmentalists 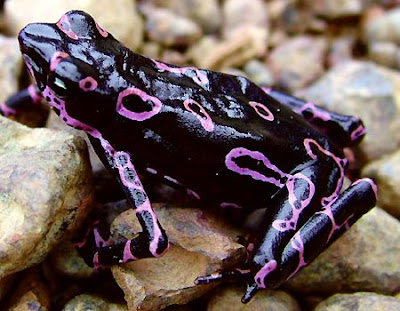 The atelopus frog is known by many names such as the clown frog or the Costa Rican Variable Harlequin Toad. Whatever you call the frog, it is a neo-tropical toad that was once quite wide spread living throughout Costa Rica and Panama. The species is listed as critically endangered and is thought to be living primarily in Panama today. Photo: Paul Ouboter / Conservation International. 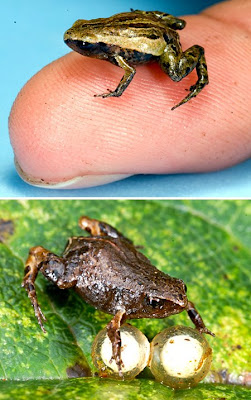 
The goliath frog or Conraua goliath is the largest extant anuran on Earth. It can grow up to 13 inches (33 cm) in length from snout to vent, and weighs up to 8 lb (3 kg). This animal has a relatively small habitat range, mainly in West Africa (near Gabon). The goliath frog can live up to 15 years. Goliath frogs eat scorpions, insects and smaller frogs. These frogs have acute hearing but no vocal sac.